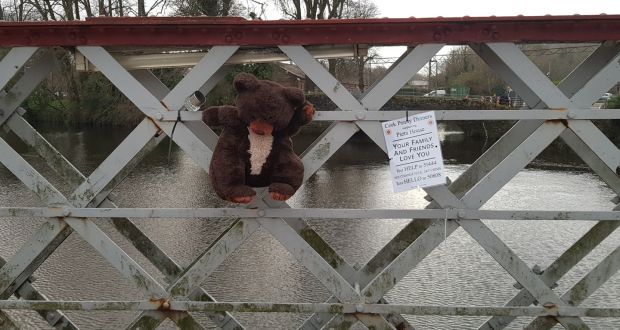 A charity and a man whose son died by suicide have teamed up to place teddy bears with messages of hope on every major bridge in Cork city. The project aims to raise awareness of help that is available.

Volunteers from Cork Penny Dinners placed the bears, solar lights and messages of hope on 30 bridges spanning the north and south channels of the River Lee and on trees along the Marina, downstream of the city.

Caitriona Twomey of Cork Penny Dinners explained that the initiative was the brainchild of Pieta House volunteer Mick Ryan, from Bunclody in Co Wexford, who lost his son Sean Paul (22) to suicide 18 years ago.

“Basically it involved putting up a teddy bear on each of the bridges, together with a solar light that shines in the darkness and a message, ‘Your family and friends love you’ along with a helpline number from the HSE and another from Pieta House that people can text,” she said.

“We hope that if somebody is in that dark lonely place and if they see the teddy bear, it will distract them for a minute and make them think of their family and loved ones and hopefully the suicidal thought will pass and they will contact the helpline.”

Mr Ryan said he had been volunteering with Pieta House for seven years and used to place teddy bears with the signs on the front of trucks traversing the country, but he had to give up his efforts when Covid-19 struck last March.

“We decided to start putting them up on bridges – the first one I put up was on the Hanover Bridge in Carlow town, and I put it up to see what response we got and people were coming from all over saying what a brilliant idea it was and they started talking about it on social media,” he said.

“If somebody is down by the river, they’re in a bad way and then they see this light and the light is shining on the sign ‘Your family love you’, and the idea of the teddy bear is they could have a kid at home who has a teddy – it’s all about reminding them there are people out there who love them.

“And it’s working because Pieta House have rung me a few times to say that they got calls from parents who reported that their young lad was after stepping on to the bridge when he saw the teddy bears and the sign and pulled back and went home and told his parents, so it is working.”

If you are affected by any issue in this article, please contact Pieta House on 1800-247247