Remember a character who is so attached to his Teddy Bear that he cannot live without it. You guessed it right “MR. Bean”. What exactly is a teddy bear to him, its not a toy but a friend, a lifelong companion.

Children and Adults have different requirements but they all need a companion when they are stressed or depressed. They need to share their thoughts with someone and what is best than a cute teddy bear. A Teddy Bear is cuddly, doesn’t demand anything back in favour and most importantly listens to everything you have to say. You can turn a crying child into a smiling one just by handing over a teddy bear in their hands. Similarly, hand over a Teddy Bear to a person who is really upset and you can see them coming back to life within a period of time.

Teddy Bear possess a kind of magical power inside itself that says “I care”, “I’m here”, and “I love you” and can make anyone happy for their life. It also has the capabilities to bring out the  inner child inside of you.

Have you ever wondered how did Teddy Bears come into existence?

We are certainly sure it’s not magic but there is a cute and small story from 1902 behind the magic of teddy bears.

Teddy as we call them is actually the nickname of America’s well-loved president Theodore “Teddy” Roosevelt. He was the 26th President of the USA.

Once our president had travelled to Mississippi. It was for assisting to settle a border dispute between Mississippi and Louisiana in November 1902. As an avid hunter, he was requested to join in a hunting trip. After many hours of trailing through the woods and not having a capture, he was to call it a day. When some members of his captured an American Black Bear and tied it around a tree for the president to have his first shoot and make his day memorable. But something went inside of our Presidents head and he refused to shoot it down, saying that shooting a defenceless bear is not good sportsmanship.

He continued with his settlement dispute finished and went back to Washington.

This action became the topic of Clifford Berryman’s now-famous political cartoon, “Drawing the Line in Mississippi,” which appeared in the Washington Post in November 1902. Response to the cartoon was so great that within a few days it was reprinted in all of the newspapers throughout the country. This action of his was such noble that he became known as a principled and sympathetic man.

At the same time with the inspiration of the Cartoon Brooklyn toymakers, Morris and Rose Michtom made a bear toy and in honour of the President, named them “TEDDY BEAR”. unlike the other real looking bear toys of the day, which looked fierce and angry. The Teddy bear of Brooklyn Toy Makers was sweet, soft, adorable and cuddly. Demand for them was great and the large American public were buying them in number. Demand grew and Michtoms started their production and marketing with Butler Brothers Wholesale to assist in distribution. Within a short span, the two companies merged, and the Ideal Novelty and Toy Company was formed.

At the same time, one young German Artist and Student Richard Steiff unknown to what was happening in America were getting on to helping with his family business. As an avid animal lover he spent most of his time creating artworks of animals at the Stuttgart Zoo, apparently, his favourite models were the bear cubs there. The Steiff company in 1902 made a stuffed bear based on one of Richard’s artwork and was introduced at the Leipzig Toy fair in 1903. They did not sell well at that time.

Unlike the other teddy bears created in America Steiff’s bears were more realistic, with a humped back and long snout. With the exception of an American others just ignored it. The American vendor ordered a total of 3000 bears to be shipped to the United States. Americans just loved the Steiff Bears and orders were coming from all over the states. The demand was so huge that by the end of 1907 Steiff bears were producing 975,000 bears a year with nearly all of them being exported to the United States.

To overcome the demand, Companies both in the United States and Germany joined together in mass production and were selling them all over. Everybody loved “Teddy Bear” Women decorated their house with them, children had portraits painted with them and slept with 1 in their hands and Theodore Roosevelt (Teddy) used one as his mascot for his re-election campaign.

The first versions of Teddy Bear have become a collectors dream to acquire them. Collectors look for early bears from Steiff, Ideal, Bing and Hermann and Schudo. But as time went on Teddy bears were made to looks more adorable and cute, giving them a baby-like appearance. Teddy bears have come a long way and have become the most popular gifting product for more than a century now. They symbolize Love and provide an expression of sympathy and happiness.

That is all, and the rest is history.

If you know of any Teddy Bear facts, please share them with us, we would like to know more about them. 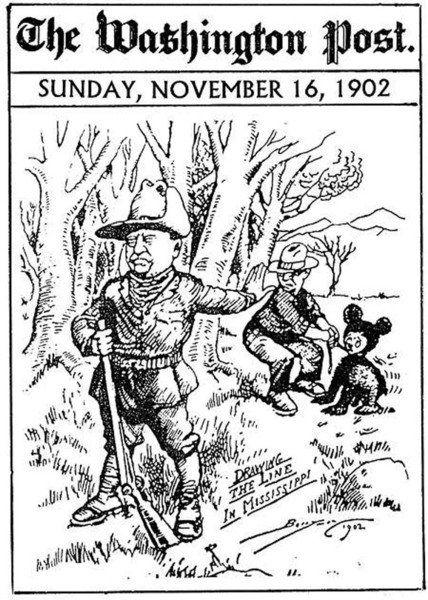